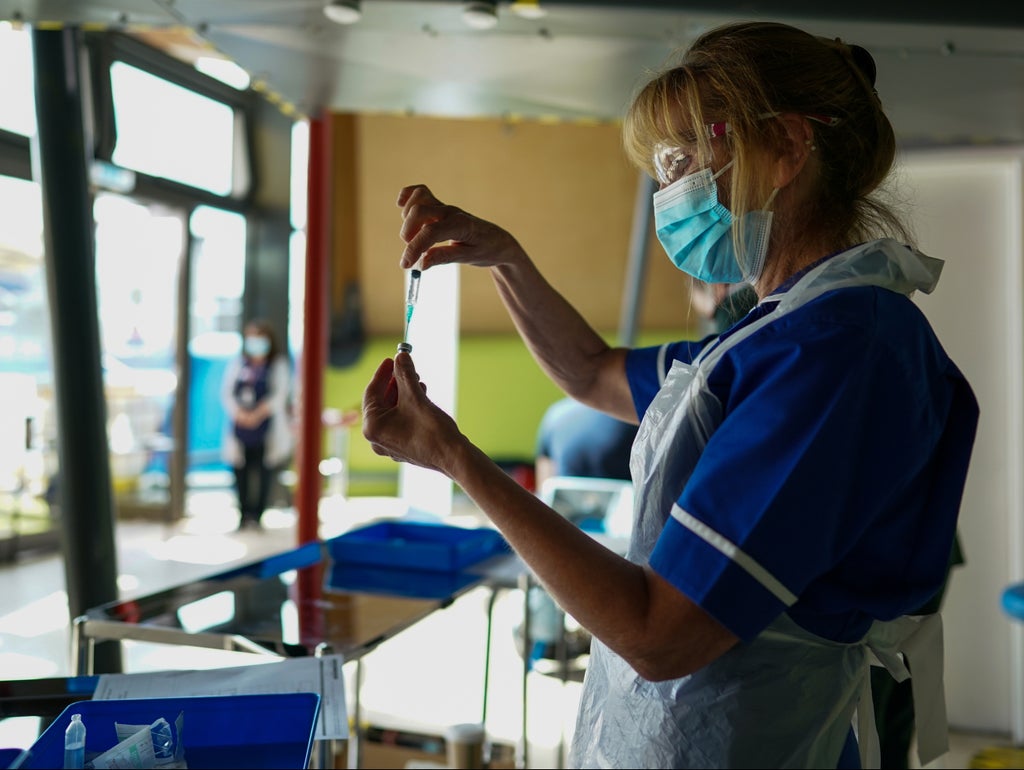 The government has begun preparations to offer millions of Covid booster jabs to the most vulnerable people from September, after new interim advice was issued by the UK’s vaccine watchdog.

As part of provisional guidance published on Wednesday, the Joint Committee on Vaccination and Immunisation (JCVI) has advised ministers to start planning for the roll out of third doses in two separate stages ahead of a feared winter wave.

Under stage one, the clinically vulnerable, frontline health and social care workers, care home residents, over-70s, and those living with immunosuppressed individuals will be invited to receive a third Covid vaccine dose, along with the annual influenza jab.

The autumn programme will then move to stage two, when all over-50s and younger adults deemed at-risk will be offered the same vaccines.

There is no set timeline on the programme but government officials are hopeful that all people in need of the immunological boost – an estimated 32 million – will have been provided with one heading into winter.

The JCVI’s advice is not fixed and could change as more data is collected ahead of the end of August, when a final decision is expected to be made.

In the meantime, the government has begun working closely with the NHS to ensure that a booster programme can be deployed rapidly. GPs, primary care networks and vaccination centres are all expected to engage as part of preparations for the autumn.

However, it’s not yet known if a booster jab is imminently needed. Studies are underway to determine the extent to which immunity fades following vaccination and natural infection, and will shape the JCVI’s final decision, as will the emergence of any new dangerous variants.

The body is also drawing data from the Com-Cov study, which is investigating immunity responses in people who have received two different vaccine doses, and the ComFluCov study, which is examining the viability of giving a flu and Covid jab at the same time.

A third study, CoV-Boost, is examining the effectiveness of the current vaccines in ‘topping up’ the immunity levels of fully inoculated people. The results are expected to be published in August.

Earlier this week, research from Oxford University found that a third dose of the Oxford-AstraZeneca vaccine induces a “strong” immune boost against Covid-19 and its different variants.

However, the scientists behind the study said “there’s no indication today that we need boosters” as data continues to show that the vaccines remain highly effective in preventing severe disease, hospitalisation and death against the different variants in circulation.

A senior JCVI member said that the expert body would have a better understanding of the duration of vaccine protection by the end of summer. For those individuals who were recruited into the first stages of the clinical trials, it will have been a year since they were first vaccinated, providing scientists with clear data on how their immune levels have changed over this period.

Professor Jonathan Van-Tam, deputy chief medical officer for England, said it was unknown what the final shape of any potential booster programme would take. But he insisted preparations needed to be put in place sooner rather than later to ensure the system was ready to react to the JCVI’s final advice.

“Being able to manage Covid-19 with fewer or no restrictions is now heavily dependent on the continued success of the vaccination programme,” he said. “We want to be on the front foot for Covid-19 booster vaccination to keep the probability of loss of vaccine protection due to waning immunity or variants as low as possible. Especially over the coming autumn and winter.”

He said he agreed with the “broad direction of travel” set out by the JCVI, and that ministers have also accepted the advice.

Sajid Javid, the health secretary, said: “Our first Covid-19 vaccination programme is restoring freedom in this country, and our booster programme will protect this freedom.”

Vaccines minister Nadhim Zahawi said: “We are now planning ahead to future-proof this progress and protect our most vulnerable from variants and flu ahead of the winter.”

It’s not expected that younger adults will receive a third dose ahead of winter; many will have only been immunised by the end of summer. Current evidence suggests that inoculation provides strong protection against severe Covid disease for at least six months – enough to see millions of people in the UK through the winter months.

The JCVI has also yet to make a decision on which vaccines would be offered under the booster programme. The Com-Cov study has shown that doses of the Pfizer and AstraZeneca can be safely and effectively mixed, but more data regarding the mixing of other jabs is expected to be published later in the summer.

The Cov-Boost study, meanwhile, will demonstrate which vaccines deliver the highest immunological top-up for people who have received two doses of the Pfizer or AstraZeneca jabs.

Government sources have said those in the vaccine taskforce are “very confident” of meeting all supply requirements depending on which jabs the JCVI recommends for any potential autumn programme.

Some experts have raised concern over the prospect of administering third vaccine doses that might not be needed when millions of people across the globe have yet to receive their first jab.

“At the moment there is little clinical or laboratory evidence that boosters are needed and JCVI has understandably not committed itself yet,” said Dr David Elliman, a consultant in community child health.

“When, in large parts of the world, there is not enough vaccine to give one dose to the adult population, is it right that we should be using up vaccine in this way? Can we, in all conscience, justify this?”