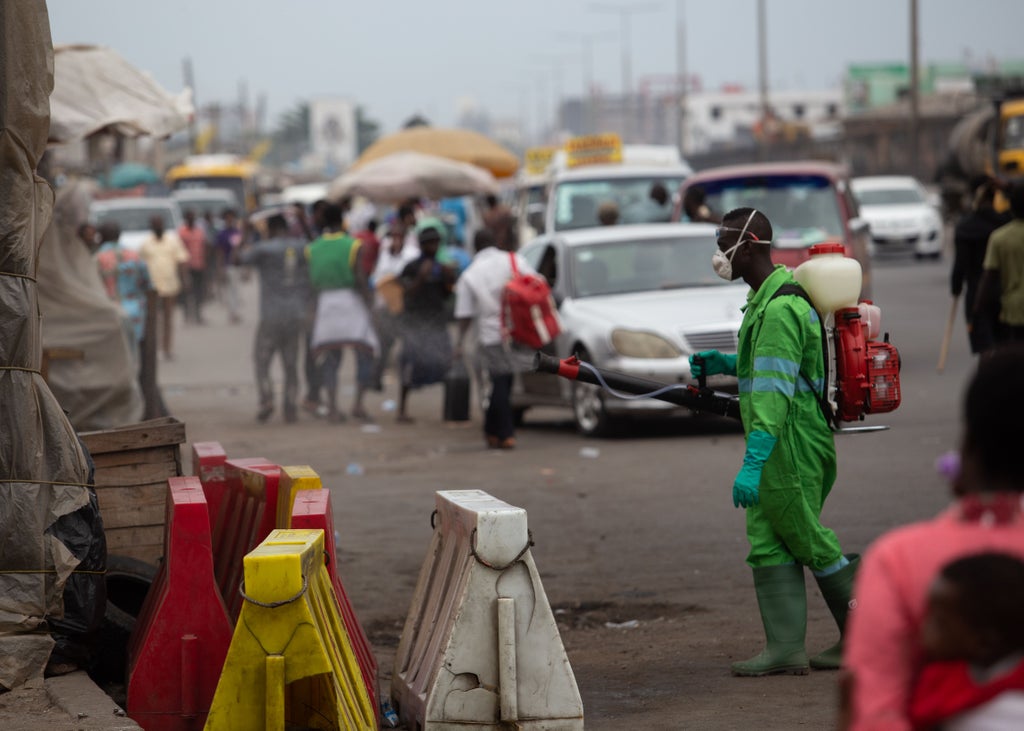 Even as millions of Americans enjoy a post-pandemic boom, fresh Covid-19 outbreaks in the developing world are undermining economic recovery and fueling political unrest.

Sluggish vaccination campaigns stand between the world’s poorest nations and the resumption of normal life, casting a shadow over a global rebound that is otherwise shaping up as the most impressive in 80 years, according to the World Bank.

The United States and other rich nations have promised to deliver one billion vaccines to governments in Africa, Asia and Latin America. But 18 months after the pandemic began, there is no agreed plan or timetable for inoculating perhaps half of the people on the planet.

Now, amid the spread of the highly infectious delta variant, and as finance ministers from the Group of 20 prepare to meet next week, the issue is gaining new urgency.

In Africa, which is suffering the world’s fastest-rising covid caseload, less than 1 per cent of the adult population has been vaccinated and South Africa, Rwanda and Uganda all have reimposed restrictions on activity. Latin America is reeling as covid deaths soar in Brazil, Argentina and Colombia. And in South Asia, India’s nearly 1.4 billion people will not reach herd immunity until October 2022, says Bank of America Merrill Lynch.

A failure to accelerate vaccinations could allow the virus to mutate into more deadly forms, leaving lasting wounds on dozens of economies, preventing for years a complete restoration of global travel and ultimately threatening Americans’ health. By aggravating societal cleavages, disparities in the pandemic response between rich and poor nations also could spur political instability and unauthorised migration, including along the southern US border, experts warn.

“The virus is still raging across the planet and we don’t have the vaccines. This is the greatest priority right now,” said Achim Steiner, administrator of the United Nations Development Program. “ . . . If this economic crisis paralyses the ability of state institutions to stand up crisis response, organise vaccination supply chains and provide recovery stimulus packages that can help the economies to recover, we will actually see a political crisis on the back of the economic crisis.”

Leaders of the International Monetary Fund and World Bank have been warning for months of a two-track global recovery that would widen the economic divide between advanced and developing nations, many of which also are buffeted by debt and climate change.

After monopolizing initial production, rich nations have made only limited progress toward ensuring an equitable global distribution of vaccines. On 9 July, finance ministers and central bankers from the Group of 20 nations are expected to take up the question of what more should be done at a two-day meeting in Venice.

Among the ideas likely to be discussed is an International Monetary Fund proposal to create $650 billion (£470 billion) in central bank reserves that countries could use to fight the pandemic, including with vaccinations, and to repay debt. The reserves would take the form of “special drawing rights,” an artificial fund currency that countries can swap for dollars, euros and yen.

If formally approved in August, as expected, the move would represent “the largest capital allocation since the end of World War II,” Steiner told reporters last week.

But those reserves would be parceled out according to the 190 members’ IMF quotas, which are linked to the size of their economies. That means the U.S. would get roughly $110 billion (£80 billion) and high-income nations in total would get about $438 billion (£317 billion), according to UNDP calculations.

Steiner and other development experts have called for wealthy nations to redirect a portion of their windfall to poorer countries. The U.S. and the rest of the G-7 backed the proposal at UK summit earlier this month and the IMF hopes to fund a new $100 billion (£72 billion) trust fund with the reallocated reserves, costing the donor countries nothing.

“The sooner you get vaccines into the arms of people and people are able to go back about their normal economic activity, you reduce scarring in the economy. You can’t solve the economic crisis these countries are facing without meaningfully addressing the health crisis,” said Wally Adeyemo, deputy treasury secretary. “ . . . We know this is not only in the interest of those economies, but in the interests of the global economy.”

Yet even if the reallocation goes ahead, it is unlikely to be a silver bullet for the vaccination shortfall, which involves access to vaccines and logistics as much as financing. But along with helping defray some of the immediate public health funding challenges, the reserve injection also is expected to help poorer countries address longer-term issues, including climate change.

“It’s enormously significant, but not for working the current vaccine challenge,” said Adam Posen, president of the Peterson Institute for International Economics.

Leaders’ failure to cope with the pandemic, meanwhile, is stoking tensions on several continents. Lockdowns have roiled politics in developed nations such as the US and United Kingdom while governments in countries like Angola and Nigeria have grown more repressive amid the medical emergency, according to Amnesty International.

In Brazil, where more than 500,000 have died, President Jair Bolsonaro has been the target of widespread demonstrations over his often-dismissive response to the virus.

At least 16 countries have witnessed significant protests “directly related” to the pandemic, according to the Carnegie Endowment for International Peace. The human toll of the crisis and the restrictive measures used in response have exacerbated the rich-poor gap in many developing countries.

“Social conflict has been on the rise even before Covid, importantly connected to issues that are chronic but had gotten worse, on inequality and, in the emerging markets, slower growth,” said Carmen Reinhart, the World Bank’s chief economist. “People care about whether their children have a better life than they did.”

The global economy is expected to grow this year at an annual rate of 5.6 per cent, more than twice as fast as in 2019, according to the World Bank. As Americans flock to restaurants, ballparks and movie theaters, total consumer spending in the US already exceeds pre-pandemic levels.

Today’s biggest economic worries involve more than two dozen low-income nations such as Afghanistan, the Central African Republic and Haiti. As a group, they are expected to grow this year at an annual rate of just 2.9 per cent, well below their performance as recently as 2019 and little more than half as fast as the overall global economy, according to the World Bank.

For a broader grouping of emerging market and developing economies, the pandemic has turned the clock back, erasing up to a decade of increases in per-person incomes, and permanently depressed their potential growth rates.

Living standards in countries like Hungary, Colombia and Morocco have slipped amid job losses and strains on education and health systems, plunging people into renewed poverty and leaving such countries farther behind the wealthiest nations. Worldwide, 100 million people will have fallen back into poverty by the end of this year, according to the World Bank.

“For three decades, the global economy had boasted that globalization had delivered more convergence between rich and poor nations; it had delivered a steady decline in poverty,” said Reinhart. “Then, enter covid and you have the first increase [in poverty rates] since the late 1990s.”

Excessive debt in the developing world represents a risk to the global recovery, the World Bank said. Emerging market economies held nearly $4 trillion (£3 trillion) in dollar loans at the end of last year, according to the Bank of International Settlements in Basel, Switzerland.

If the Federal Reserve raises interest rates – or investors push up borrowing costs in the financial markets – in response to signs of inflation, the cost of repaying those loans would soar.

While poor nations struggle, the rich prosper. Two-thirds of developing nations are not expected to regain their pre-pandemic income levels by the end of next year while 90 per cent of advanced economies will, according to the World Bank’s latest forecast.

Indeed, India, Philippines, Malaysia and Thailand are all growing slower than expected, due to new restrictions imposed in the wake of covid flare-ups, according to a recent Bank of America Merrill Lynch report. Foreign investment to all of Latin America fell last year by 45 per cent, the United Nations said. Even an otherwise strong China is growing slower than its potential for the first time since economic reforms began in the late 1970s, according to HFE Economics.

A recent surge in covid cases in southern China led to restrictions on movement that halved the traffic moving through Yantian, the world’s third-busiest container port. The facility resumed normal operations last week, but the effects of the temporary shutdown are expected to linger.

The disruption could hit retailers like Amazon, which relies on Yantian for nearly one-third of its seaborne goods shipments from China, just as the peak shipping season begins in July, according to S&P Global Market Intelligence’s Panjiva unit. (Amazon founder Jeff Bezos owns The Washington Post.)

Still, the overall US economy faces little immediate danger from the plight of poorer countries, economists said. Less dependent upon trade than countries such as Germany or South Korea, the US is expected to grow at around 7 per cent this year even as the developing world languishes.

“You’re seeing a very strong recovery in some parts of the world. But if you look at the poor, developing countries, the recovery hasn’t really started,” said Masood Ahmed, president of the Centre for Global Development.

The IMF last month called for a $50 billion (£36 billion) initiative to vaccinate 40 per cent of the world’s people by the end of this year and 60 per cent by the middle of 2022, saying it would boost global output by $9 trillion (£6.5 trillion). The fund suggested rich countries pay for the program via grants, but there is no agreement to do so.

“Eighteen months into this pandemic, the fact that we still can’t confidently assert by the end of next year the majority of the world will be vaccinated is a striking indictment of our inability to find a solution to the biggest common problem we’ve had in 70 years,” said Mr Ahmed, a former top IMF and World Bank official. “”What we are missing – still – is a battle plan.”