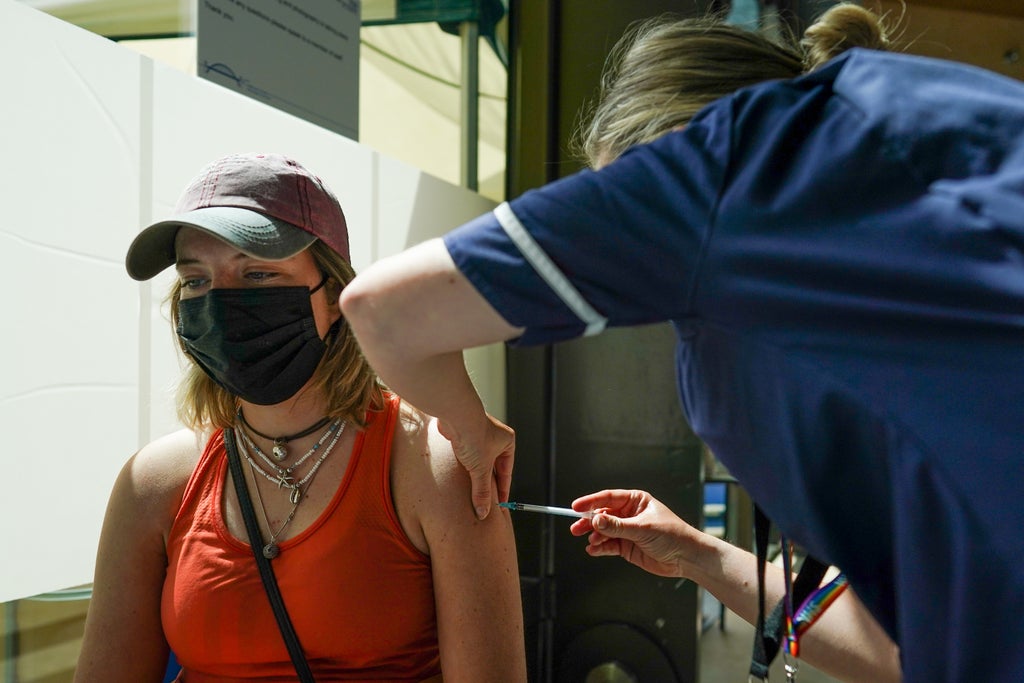 Over 2 million people in England may have had long Covid and experience one or more symptom lasting at least 12 weeks, a leading study has found.

The REACT-2 study, led by Imperial College London, found that more than a third of people who have had Covid-19 reported symptoms that lasted at least 12 weeks, with one in ten reporting severe symptoms which lasted that long.

“Our findings do paint a concerning picture of the longer-term health consequences of COVID-19, which need to be accounted for in policy and planning,” said Paul Elliott, director of the REACT programme.

Meanwhile, George Eustice, the environment secretary, said that he will not wear a face mask once coronavirus regulations are lifted on 19 July.

“What we want to do on 19 July, and the prime minister said that the data looks good to be able to have that end, is to remove all of the legal restrictions,” the environment secretary told Sky News.

He said that the question of “whether some people might choose to wear masks” or whether face coverings may be advised in some settings is “a separate matter”.

Andrew Lloyd Webber has joined a number of entertainment industry leaders in launching legal action to force the government to publish the results of its pilot live events.

The Events Research Programme ran test events at sporting, music and arts venues to assess the safety of large gatherings during the pandemic.

In a statement, the group, which also includes musician Peter Gabriel and theatre producer Sir Cameron Mackintosh, accused the government of “making it impossible to plan for any live entertainment business” by not sharing their findings.

Lord Lloyd Webber said: “Last week I rejected the government’s invitation for Cinderella to be singled out as a last-minute part of the Events Research Programme.

“Today, with a range of voices from across the theatre and live entertainment industries, we are forced to take it further. We simply must now see the data that is being used to strangle our industry so unfairly.

“The government’s actions are forcing theatre and music companies off a cliff as the summer wears on whilst cherry-picking high-profile sporting events to go ahead. The situation is beyond urgent.”

A Bristol man tested positive for Covid-19 for 305 days in the longest recorded case of the virus.

The man, named as 72-year-old retired diving instructor Dave Smith, said his wife planned his funeral five times as he fought the disease for than 10 months but has since recovered.

Mr Smith has a history of a hypersensitivity pneumonitis — a condition that caused the inflammation of his lung tissue. He also had chronic lymphocytic leukaemia, a slow-progressing cancer that affects the body’s white blood cells, thereby compromising the body’s ability to fight infections.

What time is the green list travel announcement today?

Three weeks after the last lacklustre update, the government is expected to announcement its next review of the “traffic light” travel system today, 24 June.

The Department for Transport (DfT) will decide which countries are “safe” enough from the risk of arrivals reimporting coronavirus infections to join its hallowed green list, from where travellers need not quarantine when entering the UK.

The 11-strong list currently has little choice for prospective holidaymakers, with Iceland and Gibraltar the only viable destinations for Brits.

No new countries were added last time but experts are speculating that a handful of destinations could go green in the latest update.

The coronavirus lockdown did not lead to a baby boom, new figures show, suggesting that it may in fact have had the opposite effect.

Fertility rates in England and Wales for December 2020 and January 2021 showed “relatively steep decreases” compared with the equivalent month one year earlier, down by 8.1 per cent and 10.2 per cent respectively, according to the Office for National Statistics (ONS).

Live births in these months would have mostly been conceived in the weeks following the start of the lockdown.

While there was a year-on-year increase in the fertility rate for March 2021 of 1.7 per cent, these births were mostly “conceived when lockdown restrictions were beginning to be eased in summer 2020”, the ONS said.

Live births in England and Wales in 2020 fell by four per cent compared to 2019 – the fifth consecutive year there has been a drop, the ONS said.

Angela Merkel is under fire after calling for all EU countries to force holidaying Britons to go into quarantine, in the latest threat to summer foreign holiday hopes.

“I don’t think such a move would be justified, but obviously it’s for individual countries to make these judgments,” he told LBC Radio.

People should not see Wembley as a Covid ‘free for all’, health boss warns

Prof Kevin Fenton, regional director for London for Public Health England (PHE), said it was important that people do not view the expansion of crowds at Wembley as “a sort of free for all”.

Asked if there was a double standard, with parents unable to attend school sports days but Wembley going ahead with possibly no quarantine for officials, he said: “We are where we are with the planning, and as I said the key priority for us is to ensure it happens as safely as possible, and everybody has a vested interest in making this a positive event which doesn’t become a risk to local communities, or to players or management.

“So there are protocols in place, we are working with management and the teams and government to make sure it takes place as safely as possible.”

He said: “So there are really strict protocols in place… and the data that we get from events such as these will help us to plan further events in the future, so we need to understand how to live with the virus and to do so safely.”

Prof Fenton added he was prepared to say to the government that larger crowds should not be allowed if there was something he did not like the look of. He said the rates of infection, new variant clusters and controls will be monitored, so that concerns can be raised if there are issues “that can be taken into account for decisions as we move forward”.

“But again this is a partnership that we are in trying to look at how we manage these events safely, and learning those lessons as we go ahead,” he added.

Green list: Which countries could move from ‘amber’ and will quarantine end?

As ministers meet to decide on changes to the “traffic light” system for arriving travellers, airlines, holiday companies, travel agents and trades unions are demanding that the government expand the “green list” of quarantine-free destinations – and reveal the data on which decisions are based.

Simon Calder takes a look at the key questions ahead of today’s review: