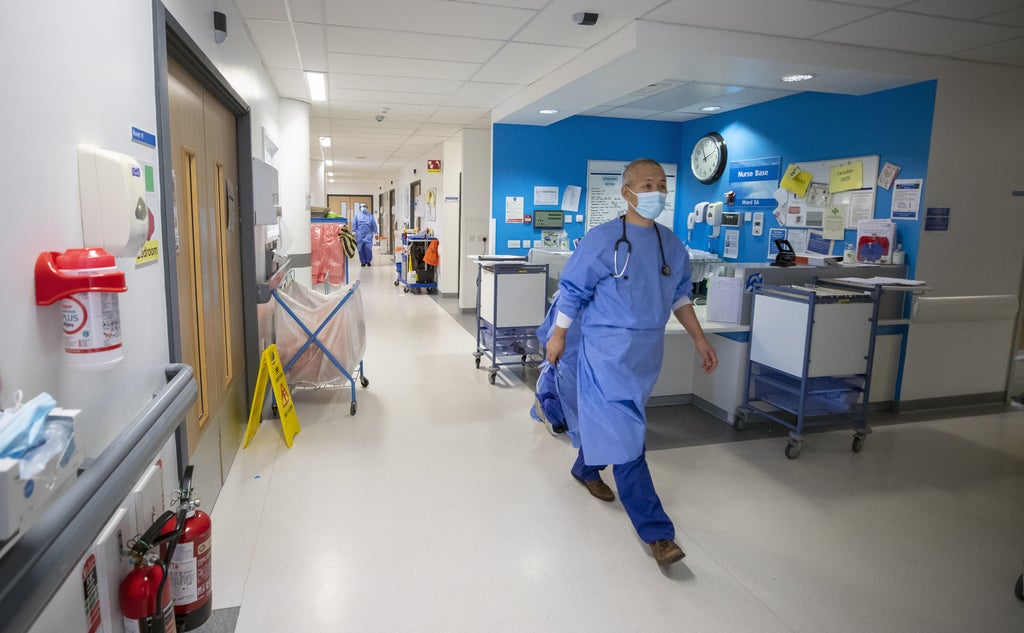 A higher proportion of patients appear to have caught Covid-19 in hospitals during the second wave of the pandemic, analysis suggests.

The likely rate of hospital-acquired infections (HAIs) rose from an average of 11.3 per cent for the first wave to 14.3 for the second surge, in which 257,108 people in England were hospitalised with Covid-19 in the nine months from August 2020 to May.

Of those, an estimated 36,824 non-Covid hospital patients were infected.

It is thought the rise is a result of the wider prevalence of Covid-19 and larger number of hospitalisations reported during winter, when the more infectious Alpha variant was in circulation, compared with spring last year.

Analysis from the campaign group Fresh Air NHS shows that the rate of HAIs in hospital trusts in England reached almost 20 per cent during the peak of the second wave.

It found that Northern Devon Healthcare NHS Trust had the highest HAI rate between August and May, with just over 30 per cent of its non-Covid patients catching the virus.

Hospitals in Southampton, Oxford and South Warwickshire were among the best in limiting hospital-acquired infections, recording an average rate well below 10 per cent throughout the second wave.

NHS officials said that infection control measures such as “hot and cold zones” to keep infected patients separate from non-Covid patients, along with social distancing for staff and patients and PPE, were implemented to tackle the spread of the virus within hospitals.

However, as the data show, there is considerable variation between trusts, with some performing far better in reducing the risk posed by HAI – otherwise known as “nosocomial infection”.

One NHS source said, “many trusts are learning even more about infection control following the onset of the Covid pandemic. [But] I believe there is still more to learn”.

Miriam Deakin, director of policy and strategy at NHS Providers, said: “Covid-19 has brought unique challenges to every health system in the world and like those health services, the NHS has not been able to eliminate that risk entirely.

“These risks include significant numbers of patients having Covid-19 without showing symptoms and, early in the pandemic, insufficient access to rapid turnaround testing.”

The analysis draws from NHS data on “probable” and “definite” cases of hospital-acquired infection. These are individuals who tested positive for Covid more than eight days after being hospitalised, having shown no initial symptoms at the point of admission.

This means the figures provided could be an overestimate. However, Dr Tom Lawton, a member of Fresh Air NHS, said the data did not take account of those patients who caught Covid-19 in hospital, were discharged due to an initial lack of symptoms and then later re-admitted with severe illness.

Dr Lawton said his analysis showed a high HAI rate could be linked to how busy a hospital is but insisted this wasn’t always a factor.

“When you’ve got fewer Covid patients [the] easier it is to do segregating of patients and focus on ventilation,” he said.

“When it becomes busier, it becomes harder to do the right things. People spend more time in A&E, where’s it typically harder to mitigate against airborne transmission. The pressures that build up are more likely to play a role.”

He added that it “is generally more difficult” to limit infections “when there’s more Covid about” but he said many hospitals across England, including some of the country’s largest, had “done very well” in tackling the spread of the virus throughout their wards.

Research by the International Severe Acute Respiratory and emerging Infection Consortium published last month in The Lancet found that an average of 11.3 per cent of patients with Covid in UK hospitals had been infected after admission during the first wave of the pandemic last year.

This proportion may have reached as high as 19.6 per cent in the middle of May 2020, long after the UK had passed its spring peak.

Dr Lawton cautioned against drawing direct comparisons between this study and the Fresh Air NHS analysis, saying that the methodology was different. His research made use of data which was not made available until August of last year.

He added that “massive” improvements had been made at all of England’s trusts since May in reducing the spread of Covid in hospitals, despite the emergence of the highly transmissible Delta variant.

However, Dr Lawton warned that rates are “starting to tick back up” again, at a time when many hospitals are facing mounting pressure from hospital admissions, emergency care demand and large patient backlogs. The current HAI rate in English hospitals is four per cent.

An NHS spokesperson said: “The ONS [Office for National Statistics] and other data conclusively demonstrate that the root cause of rising infection rates in hospitals is rising rates in the community, and weekly reports have consistently shown that outbreaks in hospitals are less common than in other settings with NHS staff rigorously following Public Health England infection prevention control guidance.

“Hospital infection rates account for less than one per cent of all Covid cases since the pandemic began and since asymptomatic tests kits were made available for the first time by the government’s test and trace programme in November, millions of staff have been tested to help to keep infection rates as low as possible.”