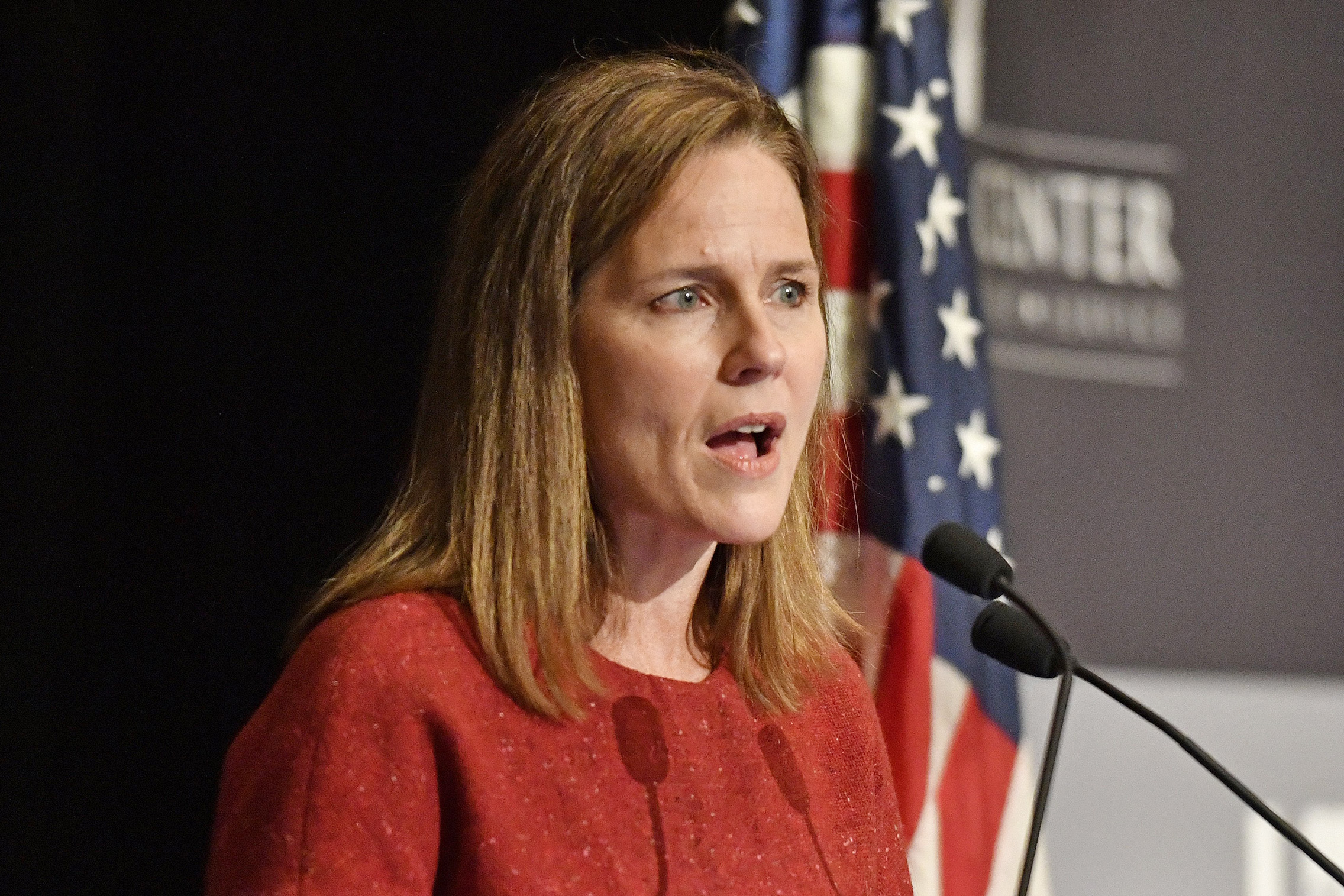 Law and politics are different things. Judges do law and politicians do politics. At least, that’s what some of the Supreme Court’s current members would like us to believe.

The justices should carefully consider the types of rhetoric they employ in defending their positions and criticizing those of their colleagues — both in their written opinions and in extrajudicial statements.

In recent remarks delivered at the University of Louisville, Justice Amy Coney Barrett pushed back against media characterizations of the court’s decision-making as politically motivated, insisting that “judicial philosophies are not the same as political parties.” She urged the public and the media “to evaluate what the court is doing on its own terms,” noting the distinction between criticizing the court’s reasoning and accusing the justices of “acting in a partisan manner.”

Barrett’s remarks echo similar sentiments expressed in recent months by her colleague, Justice Stephen Breyer, who has argued that the court’s legitimacy depends upon the public perceiving that its decisions are based on the rule of law rather than partisan politics. While their concerns are understandable, their actions may be contributing to the very partisan perceptions they decry. And both justices seem well-positioned to do more than they currently are to address such concerns.

Barrett and Breyer are correct to observe that judicial ideology and partisan preferences are not the same thing. But the role of the president and the Senate in the nomination and confirmation process often leads to the selection of justices whose ideological approaches to interpreting the law broadly align with the views shared by those political actors. It is hardly a coincidence, for example, that President Franklin Roosevelt’s judicial appointees shared an expansive view of federal power that facilitated Roosevelt’s New Deal regulatory reforms. Nor that the justices appointed by President Richard Nixon adopted views of civil liberties and the rights of criminal defendants that were at least somewhat more consistent with Nixon’s “tough-on-crime” policy views than their predecessors on the Warren Court.

This overlap between judicial ideology and the policy preferences of partisan political actors has long been a feature of our constitutional politics. But recent developments have placed increasing strain on the public’s acceptance of the distinction between law and politics that both Barrett and Breyer view as key to the court’s institutional legitimacy.

The polarized nature of our politics has contributed to a court that is closely divided on numerous hot-button political issues — such as abortion, gun rights, campaign finance regulation and affirmative action. In the 1980s and 1990s, the partisan nature of these divisions was mitigated to some extent by justices whose views did not match the ideology associated with the political party of the president who appointed them, such as David Souter and Byron White. But since the 2010 retirement of (the very liberal) John Paul Stevens, appointed by President Gerald Ford, all of the Justices appointed by Republican presidents have been recognizably more conservative than the justices appointed by Democrats.

The court’s perceived partisan orientation has been further exacerbated by the gamesmanship and spectacle surrounding confirmations. The court’s three most recent appointees — Neil Gorsuch, Brett Kavanaugh and Barrett — have each taken office amidst controversy. Gorsuch’s appointment was made possible by the Republican-controlled Senate’s decision to deny a hearing or vote to Merrick Garland, President Barack Obama’s nominee to fill the vacancy created by the death of Justice Antonin Scalia, resulting in a 14-month vacancy on the court. Kavanaugh’s confirmation was placed in jeopardy by accusations of sexual assault that he denied, leading to a highly contentious and much-publicized confirmation hearing. Barrett’s confirmation was rapidly pushed through the Senate shortly before the 2020 election by the same Republican Senate leaders who had earlier used the pending presidential election as an excuse not to vote on Garland.

The willingness of Republican politicians to play hardball with the confirmation process and the resulting shift in the balance of power on the court has left raw feelings on the left and led to increasing calls for retaliatory measures — including court-packing. The nominees were not themselves the architects of these strategies. But nor were they mere passive bystanders. Their willingness to accept and press forward with their nominations involved at least a degree of cooperation with the sharply partisan methods through which their appointments were secured.

Given the stark ideological divisions on the current court, it may be inevitable that many will continue to view the court as “doing politics” in addition to (or perhaps, instead of) “doing law.” But there are some steps the justices can take to help ameliorate these perceptions.

The first step is for the justices to refrain from unnecessarily affiliating themselves with partisan figures or positions. The irony of Barrett delivering her recent remarks at an event honoring Republican Sen. Mitch McConnell — the architect of the Senate’s obstruction of the Garland nomination and a key supporter of Barrett’s own confirmation — has hardly gone unnoticed. Other justices have attracted similar criticism for appearing at events seen as unduly political.

The justices should also consider how much of the court’s attention to devote to polarizing issues. The Supreme Court possesses nearly complete discretion over its docket, and most of its decisions lack clear partisan implications — many are even unanimous. Politically contentious cases are likely to drive perceptions that the court is divided by political rather than legal disagreement.

Refraining from deciding such cases may leave important areas of the law unsettled for at least some time. But the high court agrees to hear only a small fraction of the legal questions submitted to it, so choosing to clarify others parts of the law might allow time for partisan temperatures to cool and for public perceptions to evolve before the court again engages with the most vexing political issues.

To the extent that the court does decide politically contentious cases, the justices should carefully consider the types of rhetoric they employ in defending their positions and criticizing those of their colleagues — both in their written opinions and in extrajudicial statements. High-profile and emotionally charged cases naturally tempt justices to frame their own positions in absolutist terms and to understate the genuine difficulty of many of the legal questions the court confronts.

Just two weeks ago, Breyer joined Justice Sonia Sotomayor’s dissenting opinion in the decision declining to temporarily block a highly restrictive Texas abortion law, which accused the majority of “bury[ing] their heads in the sand” and of “ignor[ing] its constitutional obligations.” In a subsequent interview, Breyer criticized the majority’s opinion as “very, very, very wrong.” This is hardly a one-sided phenomenon: Alito accused the majority of committing a “brazen abuse of our authority to interpret statutes” in last year’s decision on antidiscrimination protections for gay and transgender individuals.

Justices who take these steps to disentangle themselves from partisanship may have to pay some price for doing so. Turning down a political figure’s invitation may disappoint and perhaps alienate a powerful supporter.

Such sharp rhetoric is nothing new on the court. And it may have its advantages in terms of persuading receptive audiences and spurring public engagement. But it comes at a potential cost of undermining the authority and perceived legitimacy of the court as an institution.

Justices who take these steps to disentangle themselves from partisanship may have to pay some price for doing so. Turning down a political figure’s invitation may disappoint and perhaps alienate a powerful supporter. Declining to hear a controversial case may limit opportunities to shape the law for future generations. And pulling one’s punches in a judicial opinion or in public comments may sacrifice some degree of rhetorical force. But it nonetheless seems likely that those justices who share Barrett’s expressed concern about public perceptions of the Supreme Court as a partisan institution will be more likely to disabuse the public of this perception through their actions rather than through their speeches alone.

Ryan Williams is an assistant professor of law at Boston College Law School.