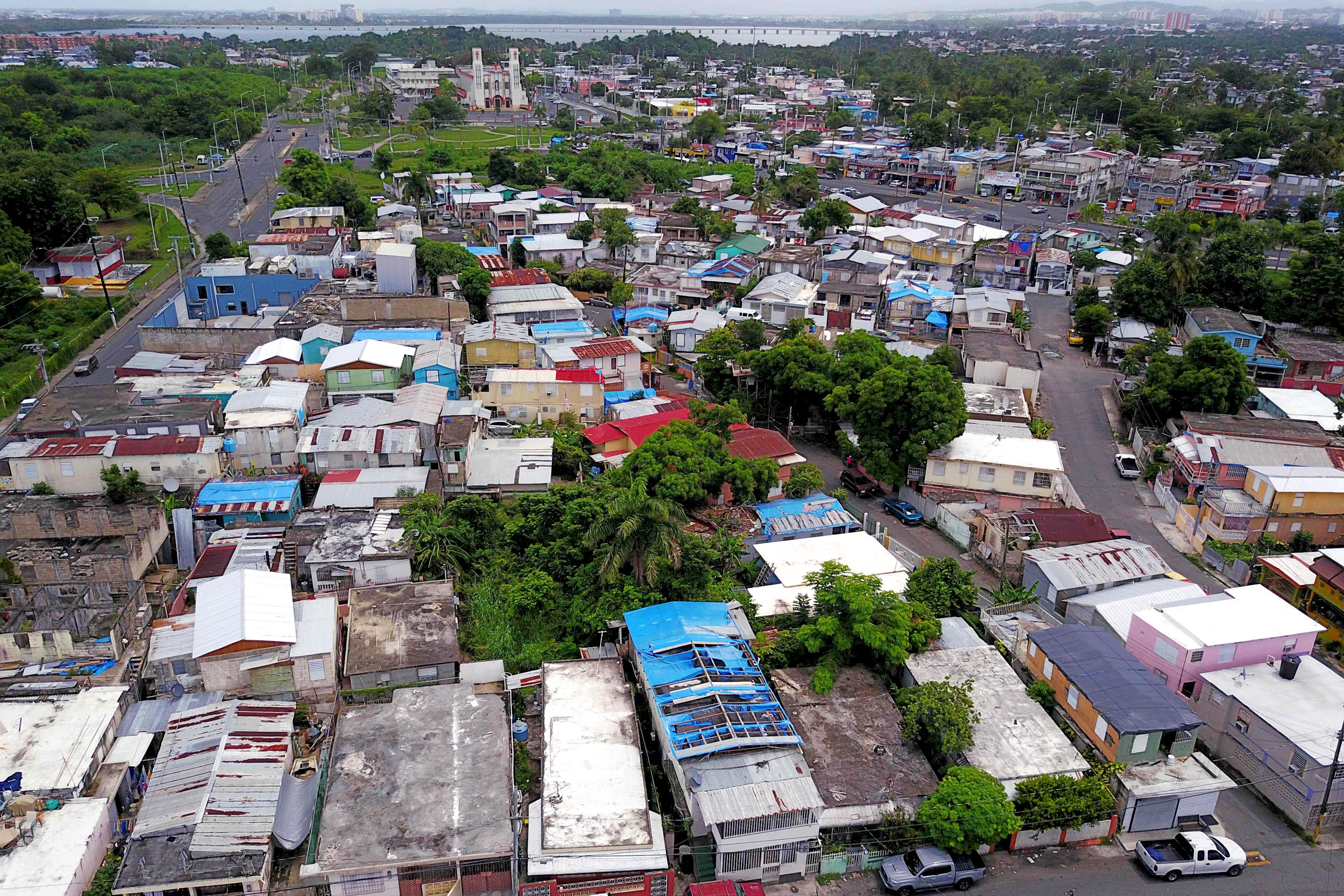 The memories of surviving Hurricane Maria still haunt people in Puerto Rico, four years after the storm wreaked havoc on the U.S. territory on Sept. 20, 2017.

There are reminders of the destruction, with thousands of homes, many of them still covered with blue tarps, yet to be fixed. Constant power outages remind Puerto Ricans that essential work to modernize the antiquated electric grid decimated by Maria has not yet begun. Deteriorating school buildings, roads, bridges and even health care facilities point to a slow reconstruction process that has not yet picked up its pace.

A new analysis by the Center for a New Economy, a Puerto Rico-based nonpartisan think tank, argues that rebuilding after the hurricane is just one of three “systemic shocks” — along with the Covid-19 pandemic and the decadelong financial crisis — that is challenging Puerto Rico.

Regarding reconstruction, some of the most important work, which includes “undertaking mitigation activities to increase resiliency and reduce the risk exposure of vulnerable populations — has not yet begun,” according to the analysis.

Hurricane Maria left $90 billion in damages and Congress allocated at least $63 billion for disaster relief and recovery operations. Four years later, about 71 percent of those funds have not reached communities on the island archipelago. Puerto Rico has received about $18 billion, according to FEMA’s Recovery Support Function Leadership Group.

The Fiscal Oversight and Management Board overseeing Puerto Rico’s finances has said the remaining bulk of the reconstruction aid is scheduled to be disbursed after fiscal year 2025, according to Sergio Marxuach, CNE’s policy director and author of the analysis.

Created during the Obama administration under the 2016 Promesa law, the federal fiscal board is responsible for restructuring Puerto Rico’s $72 billion public debt after U.S. laws arbitrarily excluded the U.S. territory from the federal bankruptcy code. It’s resulted in tough austerity measures as Puerto Rico is trying to jumpstart its economic growth.

The precarious financial situation became more complicated as compounding crises such as a series of destructive earthquakes early in 2020 followed by the Covid-19 pandemic made life harder for the 3.2 million Puerto Ricans living in the territory.

So far, Puerto Rico has made up for about two-thirds of the loss in economic activity that resulted from the Covid-19 pandemic. But Marxuach said it is important to remain cautious about the relatively quick recovery, since it’s largely attributed to a recent injection of pandemic-related federal aid.

“It is worrisome that economic growth in the short term depends mostly on receiving federal transfers that we do not control,” Marxuach stated in the report. “We worry that these expenditures will have a temporary positive impact on the economy that may set back efforts to develop a medium/long-term economic strategy or plan for Puerto Rico.”

Puerto Rico is projected to receive $43.5 billion in federal assistance related to Covid-19 by fiscal year 2023, according to the Fiscal Oversight and Management Board.

Power 4 Puerto Rico, a coalition composed of stateside national organizations, is pushing for the federal government to tackle the structural factors impeding short-term and long-term recovery. They’re also working to strengthen the U.S. territory’s infrastructure, write down its debt as part of the restructuring process and increase transparency and accountability.

The coalition is urging President Joe Biden and his administration to address the issues he promised to undertake during his campaign.

According to an upcoming fact sheet written by Power 4 Puerto Rico and shown in advance to NBC News, Biden has made good on some campaign promises, including releasing previously stalled hurricane aid and reviving a White House Puerto Rico task force to advance rebuilding efforts on the island.

But he has yet to order a review of the federal fiscal board’s fiscal austerity policy, which he pledged to do, as well as support an audit of Puerto Rico’s debt and ensure that recovery funds benefit local businesses.

The federal fiscal board is promoting structural reforms for Puerto Rico in key areas such as social welfare, energy, and ease of doing business, “which it estimates will have a cumulative positive impact equal to .75% of GNP by fiscal year 2026,” Marxuach stated in the report.

But Marxuach points out “it’s unclear, though, whether the government of Puerto Rico has the capability to implement these policies” and whether they’ll have the economic impact forecasted by the board.

Nicole Acevedo is a reporter for NBC News Digital. She reports, writes and produces stories for NBC Latino and NBCNews.com.