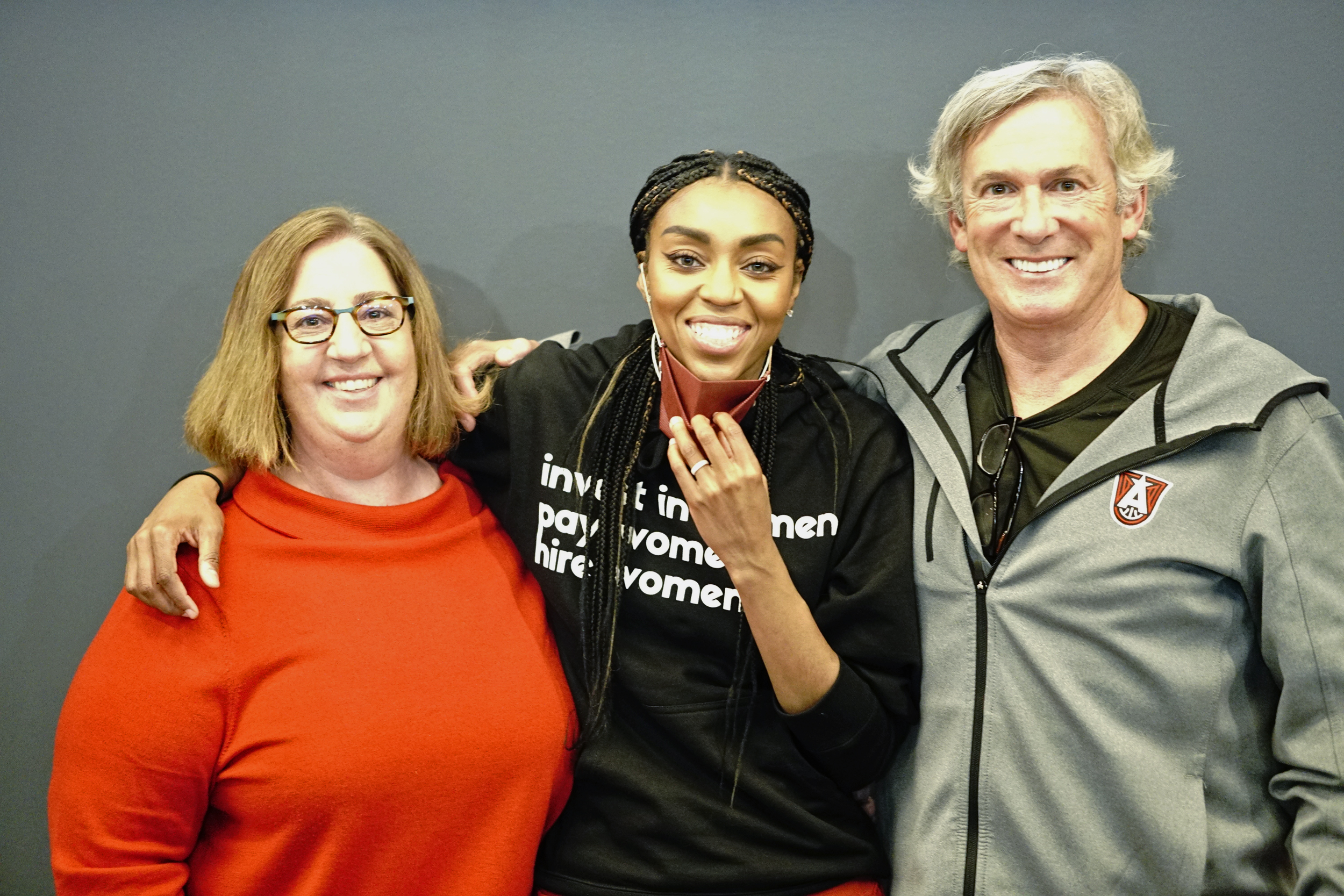 Last summer, at the height of the Black Lives Matter protests sweeping the nation, the players of the Atlanta Dream stood united against an off-the-court opponent: Kelly Loeffler, then a U.S. senator from Georgia and a co-owner of the team.

Loeffler, a Republican, had publicly and repeatedly derided the WNBA for dedicating its season to social justice issues, and in response, players on the Dream and other teams across the league wore shirts endorsing Raphael Warnock, a Democrat who went on to unseat Loeffler in one of two contentious run-off elections in January 2020. It was around this time that talks to sell the team, which had long been on the market and had attracted multiple potential buyers, began to come to a head.

Less than two months later, the WNBA and NBA Boards of Governors unanimously approved the sale of the Atlanta Dream to a three-member investor group: Larry Gottesdiener, chairman of the real estate equity firm Northland and now the majority owner of the team; Suzanne Abair, Northland’s president and chief operating officer; and two-time WNBA champion Renee Montgomery, who became the first former player to become both an owner and executive of a WNBA team.

After opting out of the 2020 season to focus on social justice issues, Montgomery, who said she was inspired by LeBron James’ role in the “More Than a Vote” campaign, recognized the rare and unique opportunity to have a stake in an ownership group that aligned with her own values, which prompted her to announce her retirement after 11 seasons.

“You can’t be a player and an owner at the same time, and for me it was a pretty quick decision, because I understood that this was a big moment that I basically wanted to capitalize on,” Montgomery told NBC News. “I felt like women’s basketball was changing.”

While there was no official announcement that the Atlanta Dream was looking for new ownership, Montgomery had “heard the rumblings” from different sources and reached out to WNBA Commissioner Cathy Engelbert, who introduced her to Abair and Gottesdiener, who had been in talks with the league about acquiring a team.

“At Northland, we basically focus our philanthropic initiatives around three items: eliminating racism, empowering women and ending homelessness,” Abair said. “If you look at those three issues, I think it’s very easy to see that there’s a clear alignment in both the progressive nature of the Northland organization and the core values of the WNBA.”

With a set of similar core values, the trio bonded over a shared desire to invest in women’s professional and collegiate sports — which, they say, continues to be undervalued and underappreciated — and in the minority communities across the Greater Atlanta area.

“We really believe that there’s a need for investors like us to do a number of things: to elevate the league, to essentially bring deep-pocketed investors to the league, to build model franchises, to respect our players as athletes and people,” Abair said, adding that there’s a “need to change that narrative” that women’s sports aren’t worth investing in.

“I would say that having Renee as the third member of the ownership team has just been really incredibly valuable to both Larry and I — just to have that former player’s perspective,” Abair continued. “Renee knows the market from a different perspective than we do, and I think having the three of us each focused on different aspects, as we start to build the organization, has been a really nice blend.”

Montgomery echoed those sentiments, adding that she understands the “inner workings of the league” and can, therefore, “do things that are more player-friendly” during periods of travel and free agency. She also credited Abair and Gottesdiener for bringing the best practices from their work at Northland to their business dealings with the team.

“And then, to take it a step further, I don’t have to hold them kicking and screaming to talk about social justice or to lean into the community of Atlanta, because they’re so in on minority-owned business, small-owned businesses,” Montgomery said. “‘How can we be a part of the community? How can we be a part of the culture?’ They’re locked in, so any ideas that we all come up with together are always going to be for community first. Obviously, we want to be great on the court — and that will come, but we want to make sure we’re doing our part from the front office.”

By virtue of their acquisition of the Atlanta Dream, Abair and Montgomery also became among the first openly LGBTQ people to own and operate a major professional sports franchise in the U.S., helping to pave the way in an industry that has historically lacked queer representation on and off the court (though the WNBA boasts a long list of out players). It’s a responsibility that both women, who know what it feels like to not be seen or represented, don’t take lightly.

“I think it’s important that members of the community, particularly younger members, see that and know that if you are a member of the LGBTQ community, you can do great things,” Abair said. “There is a tremendous opportunity for you everywhere, and I think if you see it, you can be it, or you can believe it. I think just being visible to members of the community is really important, whether it’d be as a female business leader in the real estate sector or as an owner of a professional women’s sports team.”

For Montgomery, “representation is the foundation I stand on in everything that I do,” she said with a natural fervor. “So when I’m in a room and it’s a project that I’m creating, I want to make sure that there’s representation all around — Black women, Latin women, LGBTQ [people]. I want to make sure that, all the things that I do, there are voices there that can add to it. Because, for me, when you have different people from different walks of life, you have diverse input, and that’s how you build a great brand, a great company.”

When they officially acquired the team in early March, Gottesdiener, Abair and Montgomery were less than six weeks away from the start of training camp. Describing the next month-and-a-half of preparation as “an all-out sprint,” Abair said that the group faced a steep learning curve as they worked diligently to get up to speed about the inner workings of the team and the strict, league-mandated Covid-19 protocols.

But while the leadership of the front office has changed, the new co-owners wanted to reiterate that they are committed to honoring the same spirit that brought women’s basketball into sharp focus last year — and recently earned the Atlanta Dream ESPN’s “Sports Humanitarian Team of the Year Award.”

“It’s not like this was a one-and-done sort of goal for the players, and we will continue to honor that spirit and that commitment around causes that the players and other individuals in the organization care deeply about,” Abair said. “We need to live up to our name. We are the Atlanta Dream, named after Martin Luther King’s famous ‘I Have a Dream’ speech. Our goal is to build an organization that honors the legacy of our name by rising to meet the urgency of now, whatever that may be in the political landscape.”

“With the civil unrest that happened in 2020, I think a lot of people’s eyes were opened to not even just social justice but women’s sports,” Montgomery added. “A lot of people were introduced to the WNBA in 2020 in the sense of they didn’t know about the culture of the league, the players in the league, what we stood for. I was really happy to see that people started to dive deeper into the players and the storylines of the WNBA, and now we have new fans.”

Despite the change in leadership in the United States Senate, Montgomery said the current sociopolitical situation in the country continues to be top of mind for the entire organization, particularly as state and federal governments pass legislation on increasingly fraught issues like voting rights and abortion.

With no intention of rehashing the past, the co-owners have signaled that, with their acquisition of the Dream, they are committed to creating a “flagship franchise in the WNBA,” partnering with other organizations in the community, and winning both on and off the court.

“That means building an organization both on the business side and the basketball side with a winning culture,” Abair explained. “When we talk about winning off the court, we mean [something] that honors our name … that our players are visible in the community and that we’re essentially a valued member of the Atlanta and Greater Atlanta marketplace like the other professional sports teams in the market. [We mean] occupying our own space and having our own brand and really elevating women’s professional sports in a relatively crowded sports market.”

At the end of the day, it comes down to “not being afraid to take a stand on issues, even when it might not be the most popular thing, but you’re doing it because you think it’s right,” Abair said.

“I’d be lying if I said I didn’t want to create a dynasty here, where every year we’re in the running, and it’s a surprise if we aren’t … And then, in the same breath, our goal is to be that North Star in the WNBA,” Montgomery added. “Suzanne sent an email out to all of the players at the beginning of the season, asking them, ‘What issues are you passionate about? What do you want us to be leaning into?’ We want to be able to adapt to which players we have. … But we just really want to be that organization that leans into social justice, that leans into women empowerment. Those are the pillars that we stand on.”