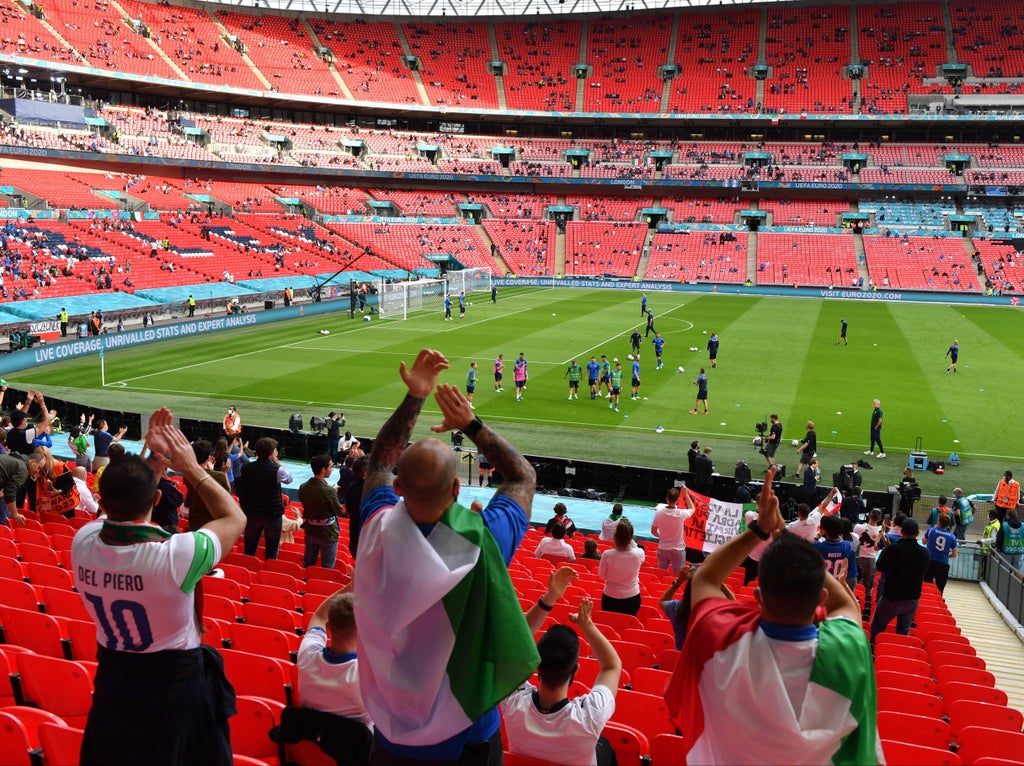 Sadiq Khan, the mayor of London, said he felt “reassured” over the prospect of tens of thousands of fans attending the semi-finals and finals of Euro 2020 at Wembley Stadium.

The government recently announced it would increase capacity at the stadium to 75 per cent capacity for the final three matches of the European Championship, allowing more than 60,000 people to attend each of those games.

Professor Lawrence Young, a virologist at the University of Warwick, warned the move was a “recipe for disaster” given the continuing spread of the highly transmissible Delta variant, while the World Health Organisation said this week that it was “concerned about easing of restrictions in some of the host countries”.

However, Mr Khan has sought to downplay any concerns surrounding the increased capacity of Wembley Stadium.

“What the government, working closely with Uefa, the FA, Brent Council, Public Health England … is doing is making sure the environment is safe, with lateral flow tests, you’ve got to have two jabs,” he told the BBC on Sunday.

“I’m reassured. It’s going to be great for our city. The entire world’s going to be watching London for the finals and the semi-finals.

“We’ve worked incredibly hard to make the game safe and I think we should be proud of that.”

So far, only 20,000 fans have been able to attend Euro 2020 games held at Wembley Stadium. Following the latest ruling on the tournament, the semi-finals and final – to be held on 6, 7 and 11 July – will see the largest gatherings of people at a sporting event since the pandemic took root in the UK in March 2020.

Mr Khan’s comments come in the wake of a new government report which found that just 28 cases of Covid-19 and “no major or uncontrolled outbreaks” were detected from nine large-scale pilot events held between between 17 April and 15 May.

Scientists behind the Events Research Programme (ERP) described the findings as “reassuring” but warned that the case numbers must be treated with “extreme caution” given the low number of people who tested themselves after the events.

They acknowledged that the degree of uptake of polymerase chain reaction (PCR) testing before and after the pilot tests meant it was “challenging to determine” the full nature of Covid transmission at the different venues, but said “no substantial outbreaks” were linked to the events.

It drew its results from the nine pilots held in the UK in April and May – including the FA Cup final, the Brit Awards and the World Snooker Championships – and involved a total of 58,000 participants, who were required to prove a negative lateral flow test (LFT) as a condition of entry.

The data is likely to help shape the government’s decision on whether to fully reopen all theatres, music venues, pubs and bars on 19 July.

Mr Khan said the move should go ahead as planned, saying that London’s theatres in particular “have worked so hard to make themselves Covid secure”.

“The two things that are crucial over the next period is: one, to make sure everyone gets the vaccine, but also secondly, that we make sure we have a rapid recovery.”

The London mayor also called for an investigation into Matt Hancock’s time in office as health secretary.

Mr Khan also welcomed Mr Hancock’s successor Sajid Javid to his new role as a fellow son of a bus driver. “It’s always good to see this small club of children of bus drivers doing really, really well and I wish him all the best.”